Naturopathic techniques are a helpful support for detoxing the body that Look After You work with and advise use of, alongside changes in Nutrition.  A cleaner, lighter way of eating will often prompt the body to sweep away the cobwebs and when that waste starts moving, it can be challenging for the body’s organs to cope with!  Naturopathic techniques can help keep liver and bowels working at their most efficient so that the body can manage the detoxification taking place.

Castor oil packing is one such technique.  Castor oil is derived from the seeds of the castor bean plant also known as the Palma Christi which translates as the ‘hand of Christ’ due to the shape of its leaves and indicating its healing value over centuries.   Castor oil contains ricinoleic acid.  It is this acid in particular that stimulates the lymphocytes in the body to cleanse. It has been used as a healing oil for centuries. 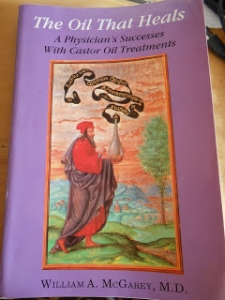 n advocate of the castor oil pack described at least 30 physiological functions which are improved for the use of castor oil packs including: stimulation of the liver and gall bladder, relieving pain, reduction in flatulence, increasing lymphatic circulation and improving intestinal assimilation. These are listed in a book by an American doctor William A McGarey MD who used castor oil extensively in his own practice.

A wool or cotton flannel pack is used as a medium for the castor oil and the pack is then applied to an area of the body needing support; for example, the liver or the lower back or a knee joint etc.  It is always best to pack the liver as well as the problem area being targeted as it is the liver that we are relying on to clean the blood – 1700 litres of blood a day to be precise!!
Dr Mercola’s website article on uses and benefits of Castor oil cites some studies that have been done with castor oil and some of the conditions helped it.

About the Author: Suzy